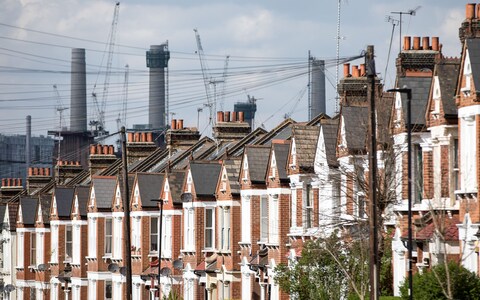 Britain’s housing market is now worth a combined £8.2 trillion, according to Zoopla CREDIT: JASON ALDEN/BLOOMBERG

The value of Britain’s housing market has fallen by £26.9bn, or 0.33pc, since the start of the year, as growth in the North East and Wales has failed to counteract falling prices in many other regions across the country.

The nation’s homes decreased in value by an average of £927 each between Jan 1 and June 30 this year, and are now worth a collective £8.2 trillion, according to figures from property site Zoopla.

While the value of the housing market in the North East has risen by 3.31pc, and Wales’ by 1.4pc, poor-performing regions such as the South West, which endured a decline in value of 2.51pc, and Yorkshire and The Humber (-2.12pc), has dragged the overall market value down.

It marks a reversal of fortunes for the UK housing market, which registered an increase in value of 3.5pc in 2017, despite a slowdown in London and the South East.

Zoopla’s most recent data found that on a local level, the English town of Barrow-in-Furness in Cumbria was the top-performer in terms of house price growth, with prices rising 6.7pc in the past six months. Holt in Norfolk experienced second-best growth of 6.27pc, followed by Pontypool in Torfaen (6.06pc).

By comparison, Reigate in Surrey saw price growth in the first half of 2018 decline in value by 6.7pc. The second and third largest reductions were seen in Lydney in Gloucestershire, and Sturminster Newton in Dorset, which reduced in value by 6.69pc and 6.64pc, respectively.

Despite property prices in London falling at their fastest rate since February 2009, the capital’s homes collectively rose in value by an average of 0.75pc in the six months to June 30.

Zoopla’s Laurence Hall said it was “not surprising” to see a small drop in values since the start of the year.

“Uncertainty around Brexit is a very real factor in the market, however on the positive side, the drop is creating a potential opportunity for first time buyers to get a foot on the ladder in some regions across Britain,” he said.

Analysts have blamed Brexit for the slowdown in the UK’s property market since 2016. House prices have risen more slowly than before the EU referendum, which hit consumer confidence and spending as the pound’s fall pushed up inflation.

According to figures from Nationwide in April, house prices were growing by about 5pc a year around the time of the Brexit vote, but in 2018 growth has consistently hovered around 1pc.

A buoyant property market depends on the UK’s economic health, so if the pound weakens further, inflation surges, and interest rates are raised, the capacity for house price growth would be reduced.