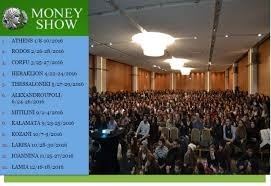 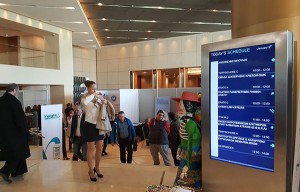 g the “2016 Money Show Forum” that was held in Hilton Athens from January 8 to January 10th 2016 the opportunity of investing in emerging markets was presented to the Greek investment community and professionals from  mr Kosta Kioleoglou .  The Money Show is more than a Convention; it is a Multi-Conference with specific audiences in all parallel events, fully controllable from the viewpoints of organization, quality and size. The Conferences operate as catalysts for the discussion of collaboration agreements and, secondarily, as information disseminators for preselected audiences. All categories of investors are covered by at least one respective event. The participation to the Conferences goes beyond the company profile promotion to the possibility for organized discussions and negotiations with every Conference organizer’s most significant prospective customers. Our collaborators in every parallel event are selected from among the most significant trade associations or specialized media.

During his speech, Mr Kosta Kioleoglou who is a Civil Engineer Msc/DBM and a Recognized Valuer (REV by Tegova) and currently servicing as CSO for the East African Region for Africa Plantation Capital, presented the opportunities, the risks and the future of investments in the Sub Saharan countries as well as the opportunities in the Real Estate Market of Kenya. 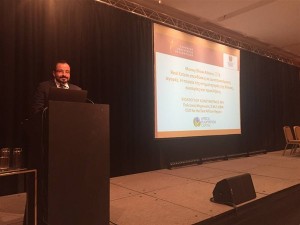 Mr Kosta Kioleoglou said “Emerging markets continue to attract the attention of investors the world over. Economic reforms, the expansion of the European Union, and changing political climates worldwide may create more investment opportunities as well as pose additional challenges and uncertainty in the years to come. From the four countries that formed the  BRIC (Brazil – Russia – India – China) the group of emerging countries that were set to reshape the world economy in the beginning of 2000 are no longer so promising.These four countries  were identified in 2001 as large and fast-growing economies that would have increasingly influential global roles in the future. They all attracted huge investments and realized an amazing growth for several years. Today though their role in the global economy seems to have taken another course. ” Today mr Kosta Kioleoglou continued “The international interests focusing to the fast growing “African continent” and especially to the sub Saharan countries. The opportunities are there, big international corporations as well as local have been capitalizing big profits the last years and every investor with a high tolerance for risk and the need for added diversification, may want to explore the potential benefits of making emerging markets a part of their portfolio”.

According to Mr Kosta Kioleoglou “The Emerging Markets are defined as those of lesser-developed countries, which are beginning to experience rapid economic growth and liberalization. Examples of emerging market countries include Indonesia, India, Kenya, Colombia and Mexico amongst others. Generally, these countries are described by a growing population experiencing a substantial increase in living standards and income, rapid economic growth, and a relatively stable currency. 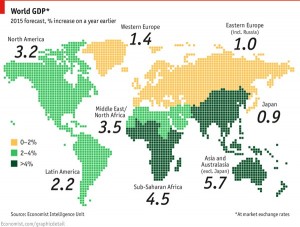 Often, emerging market countries impose strict limits on foreign investment in an attempt to limit foreign ownership of domestic companies. Investors may be prohibited from owning more than a fraction of any one company, and they may also be restricted from repatriating profits from investing activities. Investors in international securities can be subject to somewhat higher taxation and higher currency risk, as well as less liquidity and risks of social and political changes, compared with investors in domestic securities. There may be also differing accounting standards and different regulation of securities markets. Sub Saharan Emerging markets can be volatile; they are considered appropriate only for suitable long-term investors with an investment time frame of 10 or more years. Still there are investment opportunities that require shorter investment period.

With an average growth rate of 4,5% respectively according to the World Bank  & IMF for 2015 and  a forecast of over 5% for 2016 this area is definitely interesting. Recently   China’s President Xi Jinping pledged $60 billion to African states ,China has been one of the biggest investors in the Sub Saharan Africa region and has shown special interest in Kenya. Some of the country’s mega projects like the “Railway SGR” are already under construction. The Standard Gauge Railway (SGR) line, being built by the China Road and Bridge Corporation (CRBC), is the largest infrastructure project in Kenya since independence in 1963. More than 25,000 Kenyans have been employed for the ongoing construction of a Chinese-funded high-speed railway line linking Kenya’s port city of Mombasa to the capital Nairobi, according to available data. Several other Mega projects have already started and been announced following the Vision 2030 program that will change Kenya.”

With the interest of the participants raising, mr Kioleoglou Kosta continued ,“Kenya has been growing with a very good pace the last years with the world bank estimating an average growth between 5,7 and 6,1 % for the next 3 years. Recently the
World Bank has confirmed Kenya’s lower-middle income country status following the change in the way the size of its economy is calculated which showed it was 25 per cent larger than previously estimated. Most of Kenyan economy’s sector are growing but the one that has outperformed is the Real Estate representing today over 10% of the GDP.” Mr Kosta Kioleoglou added “ Kenya with a population that exceeds 45,000,000  and is growing fast , has a huge need for housing. The Real Estate sector has been the center of interest for local as well as international investments. Prices in some areas have produced profits of over 400% and the house price index has been steadily growing from 150 to 400 units according to Hass Consults. The 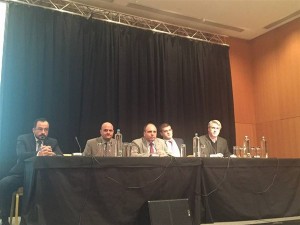 government and the authorities are supporting the industry trying to create a business friendly and a safe environment while modernizing the procedures and following up with the international standards. The KBA introduced a house price index , while the Capital Market Authority was introducing REITs in the country . The land registry is moving towards the direction of digital data and changes are happening every day promising better conditions and investor’s friendly procedures. Nairobi has been the center of growth but satellite cities around the capital are also gaining space producing very interesting yields and profits the last years.” . Political stability, economic growth and foreign investments are promising to boost the country’s growth. Still there are a lot of challenges as 2016 is expected to be extremely volatile with international markets facing a global turbulence. Investors have to be extremely careful but not negative when it comes to invest in emerging markets. It is though important to identify alternative investment opportunities. Focusing to traditional Real Estate investments could be risky. The continues price growth in residential and commercial property may not be sustainable if the rest of the economic sectors and macroeconomic data do not perform well. Already international corporations are looking for alternative options to capitalize the most out of the Kenyan Market. Africa Plantation Capital is a good example. After analyzing the possible opportunities, we decided to invest combining the country’s 2 best performing sectors of the economy.
The new upcoming Real Estate Sector and the one that has been traditionally supporting Kenya’s growth “Agriculture and Forestry”. Africa Plantation Capital which is a member of the Plantation Capital Group has decided to expand its operations in the continent and invest in a project that will create both Capital Growth and good yields. With a vast experience in progressive and sustainable agriculture and forestry, Africa Plantation Capital’s target is to create the largest Bamboo Plantation in the East Africa Region. 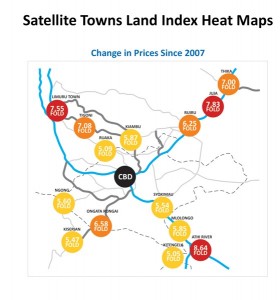 The company’s plans include the acquisition of over 5000 acres of land, creation of nurseries, logistics and other facilities that will eventually provide over 1000 jobs in the country and an amazing investment opportunity. The production of Bamboo mass will be exported to Asia for the fiber and energy industry. Kenya is the ideal location to set up mega projects like this as it strategically located, has the human resources, good climate and extremely good soil options and the Group is  considering to proceed with more projects in the near future. ” added mr Kosta Kioleoglou before concluding his speech.

Finally, he said “Along with high potential returns, emerging markets also offer diversification benefits. Because these markets tend not to move in tandem with those of developed countries, they may be rising while other markets are falling. Hence, they can help reduce the overall risk of a portfolio. Based on these factors, many financial advisors recommend long-term investors allocate 3% to 10% of their stock portfolio to emerging markets, depending on their investment goals and tolerance for risk. Emerging market investments entail higher political and liquidity risks than domestic investments, and as such may be more volatile. Currency risks also affect emerging market investments. If the value of the dollar declines against the currency of the emerging market country, returns will be lower. There are obviously several risks involved when it comes to invest in emerging market and this is the reason why a lot of research and market knowledge is required before any investment. Usually investing together with a big corporation can minimize the possible exposure to risks and maximize the possibility to realize good returns on your investment. Kenya has several opportunities and the Honorary  Consulate of the Republic of Kenya in Greece together with the The«Hellenic – Kenyan Chamber of Industry, Commerce, Tourism & Culture» are an ideal way to start your research if interested to know more about investing in the sub Saharan and Kenya “

Money show attracted over 50,000 participants – visitors and more than 1500 companies. It was the 27th money show forum, and this year was organized with the support of the Hellenic – Chinese Chamber . 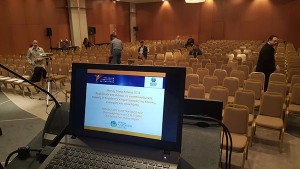 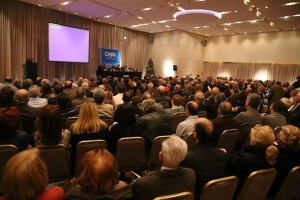 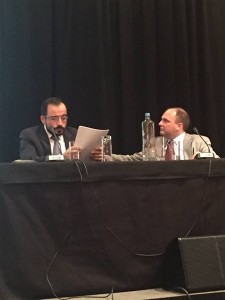 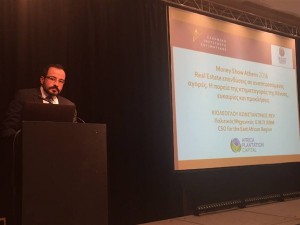 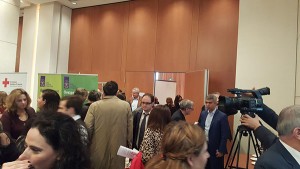