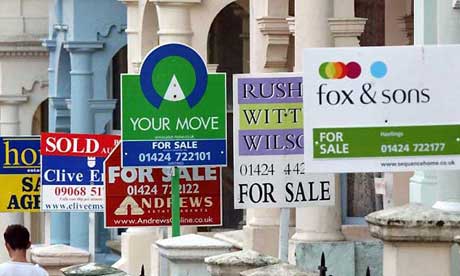 Report: Asking prices are rising because sellers are in the minority

A shortage of homes and high demand for properties have combined to drive asking prices to a new record high, according to Rightmove.

The property website said new sellers’ asking prices increased by 1.6%, or £4,381, month-on-month in April to reach £286,133 on average across England and Wales.

Pushing up prices was a shortage of homes on the market, Rightmove said, with the number of newly marketed properties so far in 2015 down 4% from the same period last year.

That contrasted with rising demand as visits to Rightmove’s website rose by almost 20% to an all-time high in March.

Rightmove’s findings echo other surveys which have suggested that house price growth in Britain is picking up again after slowing last year when regulators introduced tougher checks to secure mortgages.

Experts have suggested that some sellers could be awaiting the outcome of the General Election before putting their home on the market.

Rightmove director Miles Shipside said: “Hesitation to sell and the use of property as a long-term investment are factors in this month’s new price record.

“As we approach the election, the highest-ever cost of housing sets an interesting challenge for political leaders.”

The Conservatives have announced plans to allow more people living in social housing to purchase their homes at a discount while Labour has said it plans to increase new home-building to 200,000 homes a year.

Mr Shipside continued: “The high cost of housing is a big concern for many home-hunters, so the contents of the respective party manifestos and well thought-out sustainable solutions to the lack of affordable housing supply will be high on many voters’ agendas too.”

Rightmove said the challenge to meet the country’s housing needs was greatest in the south of England, including London, the South East, the East of England and the South West.

Severe property shortages in London in particular have pushed prices up there by £195,420 or 49% typically over the last five years, the website said.

Buyers looking for a home in the capital are now facing an average seller asking price of £594,585.

House prices in northern England have recorded a 3.7% increase over the last five years while the figure stands at 2% in Wales.