Taylor Scott International, conducted a property market survey in Nairobi for the first quarter 2014. The company collected a total number of 1792 surveys collected across a range of different venues. The majority of people who participated belong to the middle and upper class .The main objective of this survey was to identify property ownership amongst the actual middle and upper class social group and combine the results with the marital status, age and type of profession.
From the results extracted by Taylor Scott International’s market analysis, team leader Mr. Gianluca Storchi, who holds an MSc in Economic Policy from University College London and is a professional market analyst, found that in three quarters of the questionnaires, respondents stated that they own the property they reside in whereas 18 per cent said they do not own it.
Over half of the respondents were aged between 35 and 45, almost a third aged between 45 and 50, 12 per cent aged below 35 and a very small proportion aged over 60. It is also important to mention that the large majority of the responders, representing 91 per cent of the sample, were married while 7 per cent were single. A significant proportion of respondents, almost half, stated that they are self-employed. Just over a third reported being employed in the private sector, 10 per cent were civil servants and less than one per cent were retired. For individuals who were married, 76 per cent were home owners and 18 were not.. In comparison to those who are married, home ownership is lower among single respondents (71 per cent), and a higher proportion of them (25 per cent) report not owning their home. 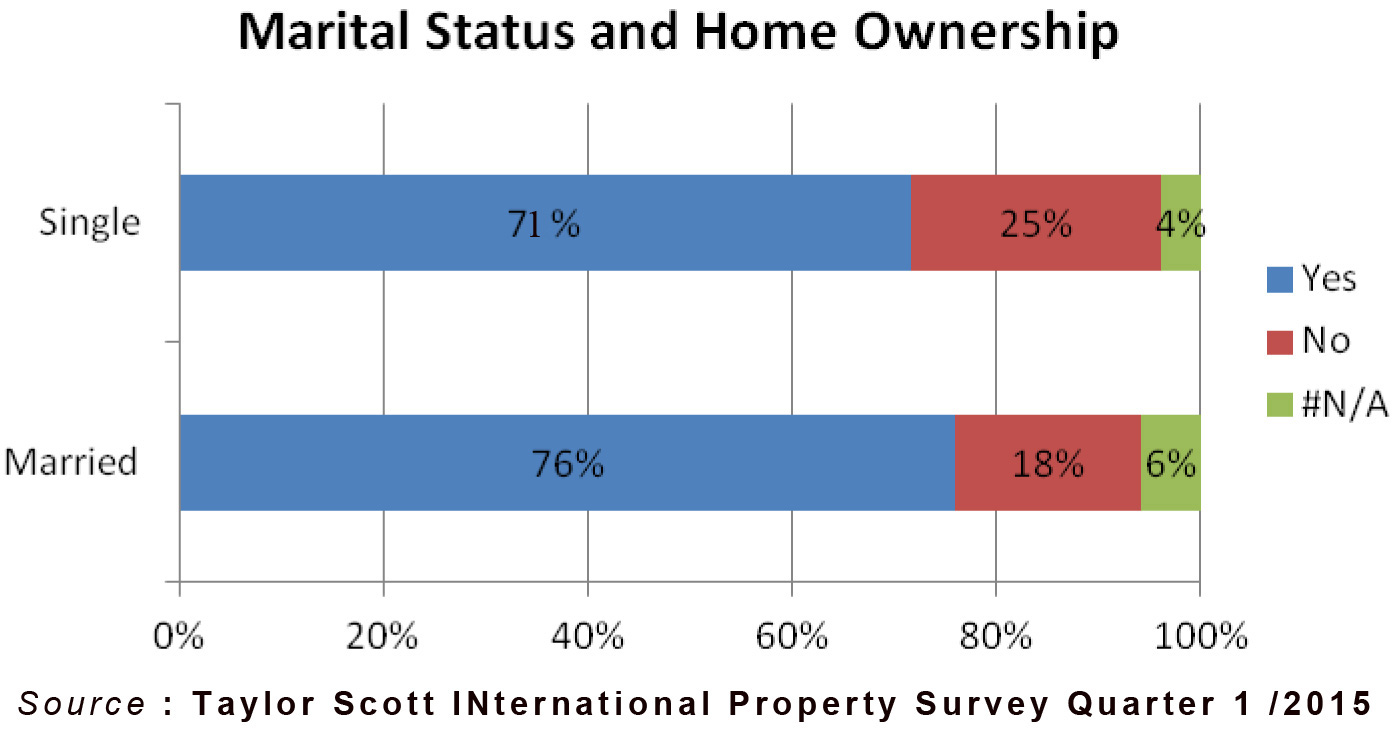 It is immediately apparent from the chart below that respondents from older age groups have higher rates of home ownership. For those aged 45 and above, 82 per cent report owning their home. Whereas, for those aged below 35 and those between the ages of 35 and 45, the proportions of home ownership are 67 per cent and 74 per cent, respectively. 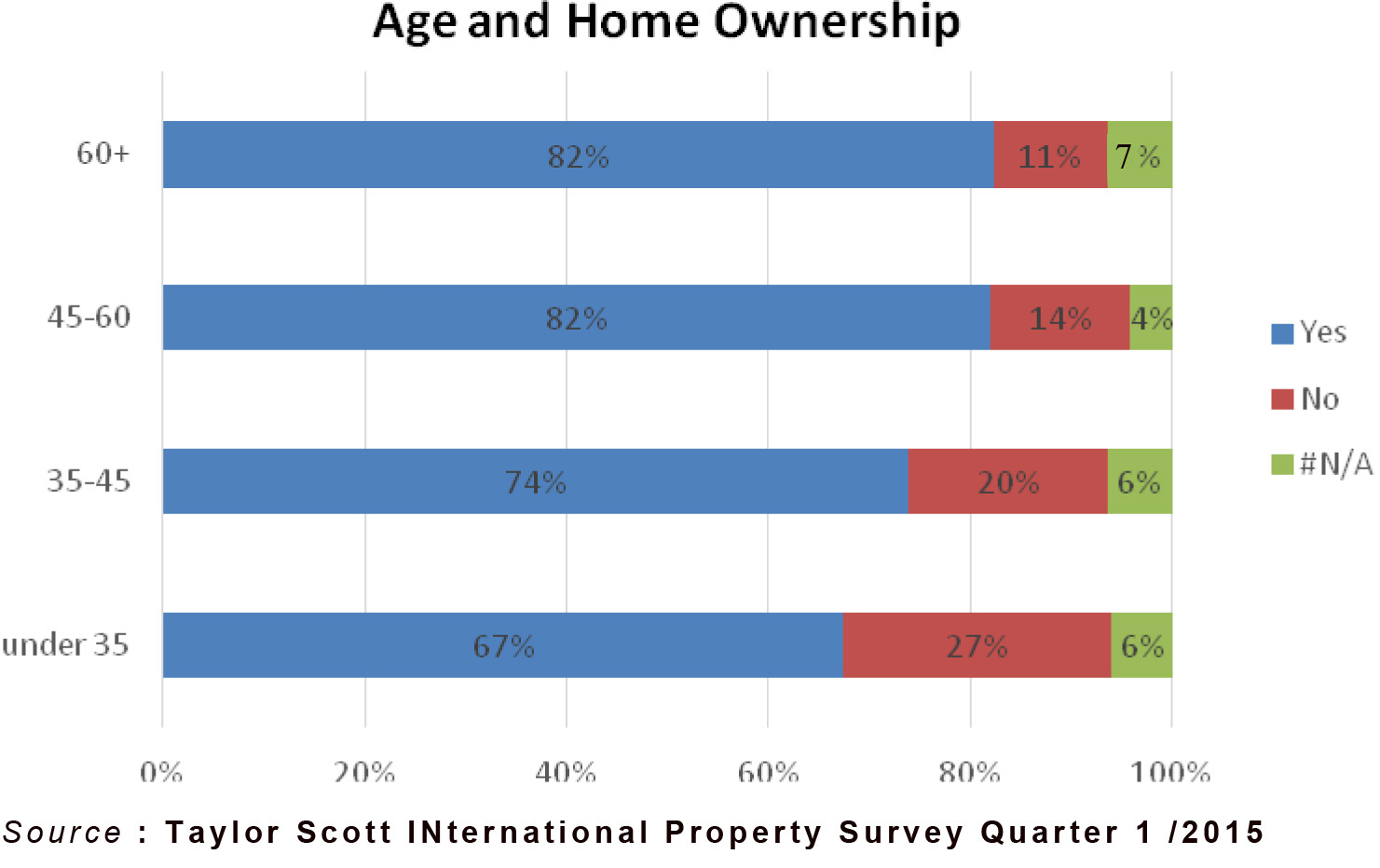 Individuals reporting that they are self-employed, who account for almost half of the sample, exhibit the highest proportion of home ownership followed by those working in the private sector, civil servants and retired people. 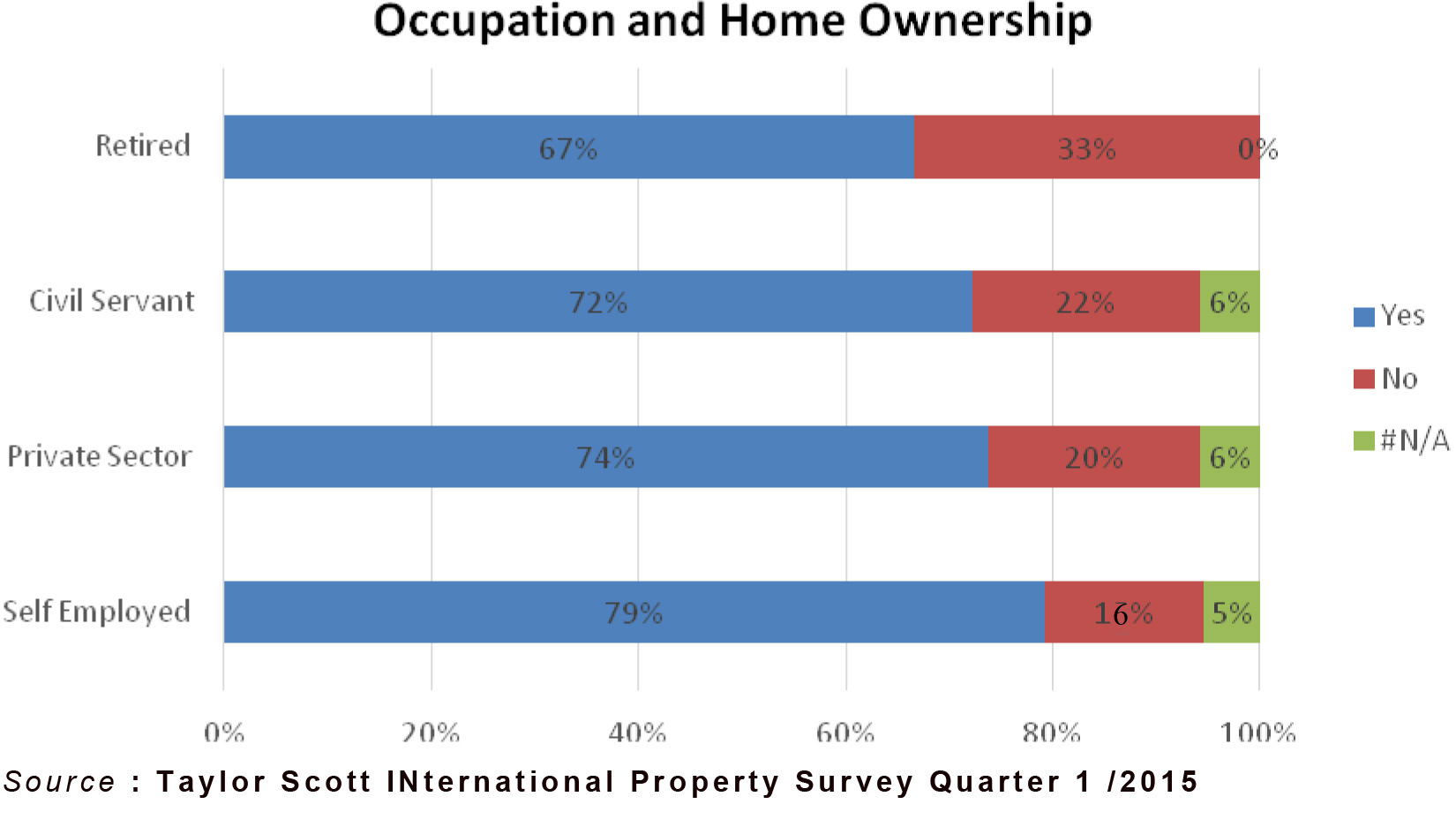 The table and charts below shows how home ownership is distributed across marital status, age and occupation for the 1792 respondents of the survey. 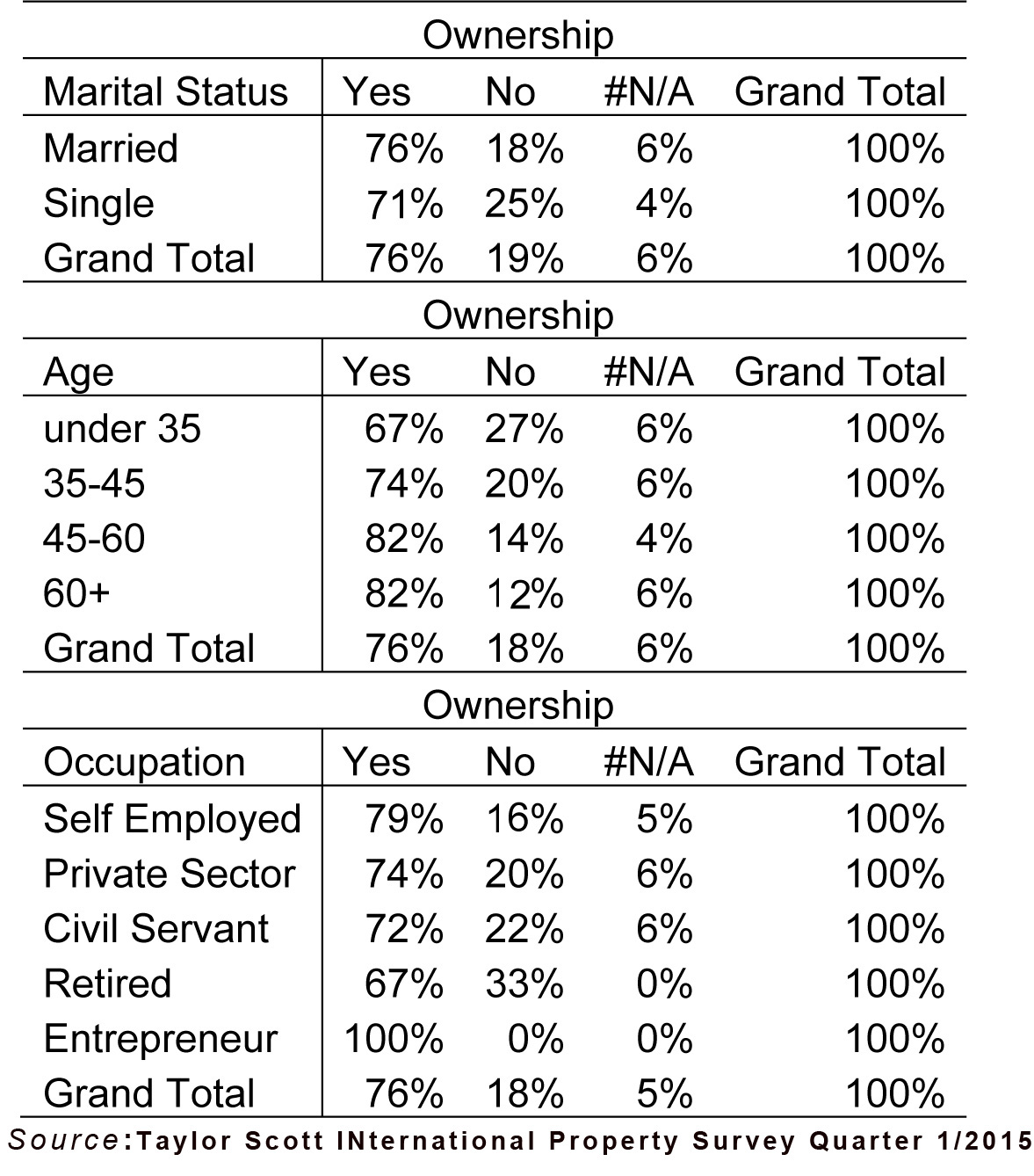 Taylor Scott International’s property market survey was targeting to analyze the property ownership status of the actual part of the market that can afford to purchase property and not from the absolute total of the Kenyan population. It is obvious that the demand and supply of the Kenyan Property market has to be split between at least two segments.

About 80% of the population cannot afford to purchase any property due to extremely low income status. The rest 20% of the Kenyan population, is the actual target group of people that consist the actual demand of the market. The survey clearly shows that there is quite a high percentage of existing property ownership amongst the specific target group that is actually representing the market today.

According to the Kenya Bank Association, house prices registered a positive but mild growth during the first quarter of 2015, albeit faster than the growth realised during the last quarter of 2014. The average house price increased by 2.75% according to the HPI first quarter 2015.The outlined drivers of prices point towards the fact that the supply side of the market has been more responsive to households looking at a house beyond the fact that it provides the basic need of shelter. In es­sence, the lower income households that are simply seeking ownership for shelter purposes, remain constrained by supply.

Analyzing Taylor Scott International’s report findings together with the House price Index of Kenya Bank Association for the first Quarter 2015, as well as the latest available data from the Kenya Bureau of statistics, we see a real estate market that is struggling to maintain its up going trend. The demand of the population that can actually proceed and afford to purchase properties from the available supply is limited.

It is obvious from Taylor Scott International’s survey results that a large majority of the medium and upper class families already own a house, limiting the demand to very small numbers. We would like to make it clear that there is a large part of the population that is actually in big need for affordable housing. The fact though is that affordable housing is an almost non existing part of the real estate industry of Kenya and does not determine the house price index growth over the years.

Risking to forecast the next quarter, Mr. Kosta Kioleoglou, who is the Director of engineering and property appraisal and was leading this market analysis, believes that the recent increase of CBR up to 10% (an actual 20% increase of the 8.5% CBR) will be one of the key factors that will negatively influence the market.A further increase of the CBR is expected in the following months.

Within the last few months, developers and potential buyers have been waiting for an interest rate relief hoping that this will boost the stagnant real estate market and will make the purchase of a house more affordable. Due to the general macroeconomic overview of the country though, and especially because of the continually weakening currency that threatens to make foreign debt interest payments rise rapidly, the Central Bank of Kenya decided to move towards the opposite direction.

According to the available data from the National Bureau of statistics, the CPI increased by 4.9 per cent (respectively) from 153.43 in January 2015 to 160.46 in June 2015. The overall inflation rate stood at 7.03 per cent in June 2015. The KES is struggling to stay below the support level of 100 to the USD. Kenya also recorded a Current Account deficit of 7.50 percent of the country’s Gross Domestic Product in 2014 which so far seems to be following a negative direction during 2015 with economists forecasting that it could reach 8% by the end of the year. 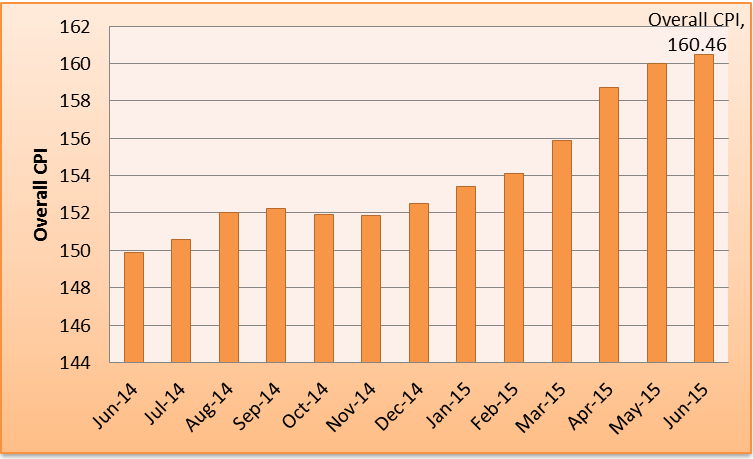 In general, the Real Estate Market in Kenya needs to diversify in order to attract – become affordable to a bigger part of the population, and maintain its strong position amongst the country’s growing sectors of the economy. That requires that the affordable house investment becoming the leading option of the market.

Prices in the following months are expected to remain to similar levels with slow growth and the overall annual performance will not surpass the country’s inflation. Looking at that and considering the rest of the macroeconomic data of the country, in the medium to long term Real estate market seems to be weakening. This is due to the market not producing sufficient returns to actually cover the borrowing costs and secure real capital growth.

Due to the current volatility of the economy, inflation and KES, a close follow up of the market is suggested and a frequent review is required. Taylor Scott International is sponsoring the 2nd Land Investment Expo during which it will conduct an extended property market survey in order to issue its second quarter property market review for 2015.

On behalf of Taylor Scott International,