U.S. home resales fell more than expected in February amid a persistent shortage of houses on the market that is pushing up prices and sidelining prospective buyers.

Sales were up 5.4 percent from February 2016, underscoring the sustainability of the housing market recovery despite the supply constraints. The median house price surged 7.7 percent from a year ago to $228,400 in February. That marked the 60th consecutive month of year-on-year price gains.

“There is a small supply of homes for sale and great demand for them, and that’s driving prices higher in many markets. We believe the strong appetite for homes will continue, people just need more homes to choose from,” said Gino Blefari, chief executive officer at Berkshire Hathaway HomeServices in Orange County, California.

Economists had forecast sales decreasing 2.0 percent last month. In February, houses typically stayed on the market for 45 days, down from 59 days a year ago. Despite February’s sales drop, the housing market was on track to again contribute to economic growth in the first quarter through increases in homebuilding and broker commissions. 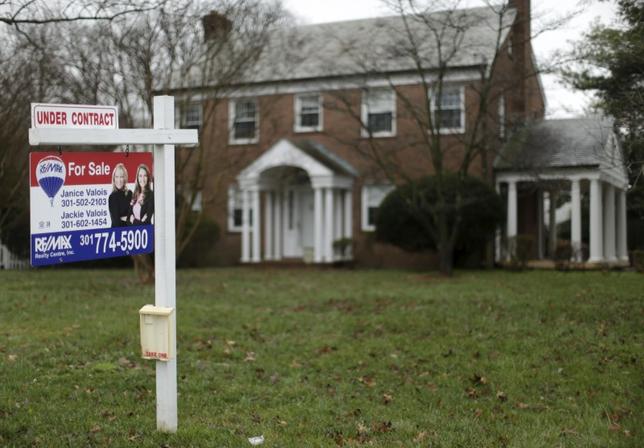 A home for sale that is currently under contract is seen in Silver Spring, Maryland, December 30, 2015. REUTERS/Gary Cameron

U.S. financial markets were little moved by the data as investors focused instead on potential delays to President Donald Trump’s economic agenda, including his pledge to cut taxes.

Economists said there were few signs sales had been significantly affected by rising mortgage rates. Although annual wage growth has stubbornly remained below 3 percent, economists expect an acceleration as the job market, which is near full employment, tightens further.

The 30-year fixed mortgage rate is hovering at 4.30 percent.

The Federal Reserve last week raised its benchmark overnight interest rate by 25 basis points to a range of 0.75 percent to 1.00 percent. The U.S. central bank has forecast two more rate hikes for 2017.

A separate report from the Mortgage Bankers Association onWednesday showed applications for loans to purchase homes fell 2.7 percent last week from near a four-month peak.

“Despite supply constraints, we see a resilient labor market and solid real income gains as likely to support a decent pace of home sales ahead, although given the backup in rates we may experience some pullback in the near term,” said Kevin Cummins, a senior economist at Natwest Markets in Stamford, Connecticut.

Last month, sales fell in the Northeast, West and Midwest regions, but rose in the South. Though the number of homes on the market increased 4.2 percent to 1.75 million units last month, housing inventory remained near the all-time low of 1.65 million units hit in December. Supply was down 6.4 percent from a year ago.

Housing inventory has dropped for 21 straight months on a year-on-year basis. Builders have been unable to fill the inventory gap, citing rising prices for materials, higher borrowing costs, and shortages of lots and labor.

Lennar Corp, the second-largest U.S. homebuilder, reported on Tuesday a drop in quarterly gross margin as the company struggled with higher land and construction costs.

At February’s sales pace, it would take 3.8 months to clear the stock of houses on the market, up from 3.5 months in January. A six-month supply is viewed as a healthy balance between supply and demand. While higher prices are increasing equity for homeowners and might encourage some to put their homes on the market, they could be hurting first-time buyers, who accounted for 32 percent of transactions last month.

That was well below the 40 percent share that economists and realtors say is needed for a robust housing market but up from 30 percent a year ago.