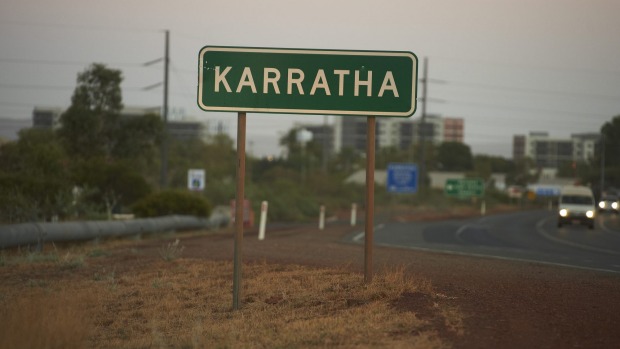 Property prices in the Pilbara town of Karratha have halved to their lowest level in 11 years as the mining town suffers a double blow from falling iron ore and oil prices.

Desperate sellers are slashing asking prices by more than $100,000 and some homeowners have been left nursing losses of nearly $300,000 on properties they bought just two years ago.

Figures from the Real Estate Institute of Western Australia show the median house price in Karratha fell to $385,000 in the September quarter, the lowest since 2005.

Corelogic figures released last week show the median rents across the Pilbara, which also includes Port Hedland, fell 9.1 per cent in the December quarter to $500 per week, after plunging 16.7 per cent in the preceding quarter.

Corelogic said rent being attracted for Pilbara properties are 71.4 per cent below their 2011 peak.

During the peak of the boom some properties attracted rent of $2,000 per week.

While Port Hedland, which is two and a half hours north of Karratha, is dominated by the iron ore industry (BHP Billiton, Fortescue Metals Group and Roy Hill export from Port Hedland), Karratha has enjoyed activity from both iron ore (Rio Tinto exports from nearby Dampier) and massive projects undertaken by the oil and gas companies such as Woodside and Chevron developing gas fields off the West Australian coast.

But iron ore and oil prices have collapsed and most of the major expansion projects are complete, prompting Woodside, Chevron and Rio Tinto to slash costs and cut workforces.

Mr Hipworth said it was taking on average four to five months to sell a property.

He said he was receiving two to three calls each week to value homes for the banks taking control of properties.

“We would get two to three phone calls a week looking for us to value a property for mortgagee in possession,” Mr Hipworth said.

Those still trying to sell property are dropping the asking price by tens of thousands each month it remains on the market, which in some cases has cumulated to price cuts of $150,000.

Mr Hipworth, who is confident the market has reached a bottom, said compounding the property downturn was increased lending criteria required by the banks, which were seeking 20 per cent deposits from home owner occupiers and 30 per cent from investors.

“If you have a property in Perth and you are using your Pilbara investment property for your financing they will no longer give you a dollar for that,” Mr Hipworth said.

‘WE HAVE HIT BOTTOM’

But Mr Hipworth said Karratha property prices had reached a bottom. They would take time to recover, he said.

“We have hit the bottom,” Mr Hipworth said.

“Prices go any lower and you are giving it away. We are at the bottom but it will take some time to work itself back up.”

He also said Karratha was now affordable for many people choosing to work and live in the town, which has benefited from an injection of more than $100 million in government spending from the Royalties for Regions program, including new road infrastructure, apartments, a new main street and a $65 million pool and leisure centre.

The souring property market is creating political tensions with members of the National Party, who have an alliance with the Liberal Party.

The Nationals do not want to extend a lease for a 1,600 bed fly-in, fly-out camp for BHP Billiton workers near Newman unless it is cut to 600 beds.

West Australian premier Colin Barnett has however given BHP his approval for the 1600-bed lease.