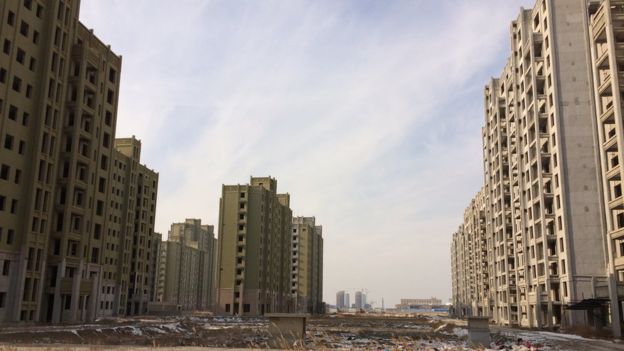 What does Wang Shi, founder and chairman of China Vanke, the world’s biggest home builder by revenue, make of China’s overheated property market?

When prospective buyers enter the 900-home development “Seaside Home” along an avenue of Grecian columns, their eyes are meant to be drawn to three athletes, chiselled from fake bronze.

At “Starry Olympic City”, another development nearby, the statues are of pouting art deco girls.

When it comes to putting the frozen city of Yingkou, near the border with North Korea, on the style map, the developers are not short of ambition.

But one thing is missing.

There aren’t any prospective buyers. In fact, there are no people here at all.

No cars on the eight-lane roads; no one in the Olympic-themed sports centre. As dark descends, light shines only from “The Happy Pizza Hut”, Yingkou’s brush with western cuisine. Whole apartment blocks are black.

“No one wants to live on this side of the river,” explains a resident of the nearby old town. “It’s too far from everything. There are no jobs. It’s a complete waste of money.”

Among Yingkou’s developers, ambition has given way to desperation. They admit privately they’ve only sold a fraction of their stock.

None would risk talking publicly, but I get a rare opportunity to sit down with Wang Shi, founder and chairman of Vanke, the world’s largest home builder by sales.

“It’s a real problem,” he concedes. “Many cities have an oversupply of housing.”

Wang’s company Vanke also has a development at Yingkou.

Harbour City promises a lifestyle more sun-kissed California than bleak northeast China. “You only live once. You need a holiday,” teases an advert.

Wang admits the project has faced difficulties, but insists sales aren’t bad, though my request to look around was politely declined.

To a greater or lesser extent, every Chinese city is ringed by empty developments. Some will eventually be filled but, for the likes of Yingkou, that’s surely impossible.

“In the west, if a city faces financial difficulties, it’ll go bankrupt. But in China, cities will be subsidised by the Ministry of Finance. So some small- and medium-sized cities aren’t worried about going bankrupt. They figure the central government will help them out.”

This is an extraordinary assertion from a major Chinese developer: that companies and local governments can spend, safe in the knowledge that Beijing will open its wallet if they run into difficulty.

But this free spending by local governments has helped inflate the biggest debt bubble in world history – and it can’t go on forever.

Now Wang Shi calls on China to address its economic problems. And he wants his company, Vanke, to help build a better future.

“We have influence. That prompts the question, is this influence there to bring a product to market? Or does it mean social responsibility, helping to shape the future of the market?”

“My next goal is for Shenzhen to become the model of environmentally-friendly and sustainable development.”

But Vanke is in rude health compared to other smaller developers. In Yingkou, Seaside Home has been left as a bare concrete shell, never completed. Locals say the developer fled, wanted by the police. Nature is reclaiming the Grecian columns and the athletes.

“Eventually we will come a point where developers, banks and local governments need to realise that a significant part of the existing inventory [of empty housing] needs to be removed,” says Credit Suisse’s China property analyst Jinsong Du.

“But obviously that will have implications for the whole financial system. The bad debt held by many Chinese banks will shoot up significantly.” 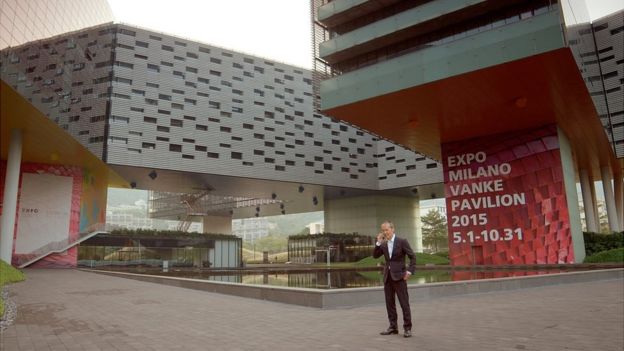 As the risk of a banking crisis grows, it’s no surprise that Wang Shi is looking for new opportunities abroad.

He admits he is motivated partly by the need for safer investments to balance his higher-risk Chinese ones. He’s also responding to the demands of Chinese customers, eager for homes in western markets.

“We are establishing an international network: San Francisco, New York, London, Berlin, Paris. We are targeting the Chinese market as they buy overseas.”

The company has bought a stake in The Stage, a 40-floor development on the edge of the City of London. Wanda, another major Chinese developer, is building one of the tallest residential buildings in western Europe at Nine Elms in South London.

Credit Suisse’s Jinsong Du says this is a valid concern, though he believes the Chinese government will stand behind its biggest developers if they run into difficulty.

But for how much longer? The risk for overseas property markets is that Chinese investors might come with hidden strings attached – reaching all the way back to the ghost towns of China.